In this blog post we discuss our October 2022 report and provide more information on how to interpret the results. The PDF report can be found at the end.

Insight for the October 2022 Monthly Report

There is a sixth dimension beyond that which is known. It is a dimension as vast as the number of psychoactive compounds and as timeless as people’s love of drugs. It is a middle ground between safer supply and the unregulated market, between science and community knowledge, and it lies between the pit of failed drug policy and the summits of harm reduction. This is the dimension of drug checking reporting. It is an area which we call…the Substance Blog.

This blog, and the associated pdf report, breakdown our sample counts into five categories:

Molecules of methamphetamine, MDMA, and morphine, who, on a chilly afternoon in October, induced a charge within the quadrupoles of a mass spectrometer - and never returned. Look for their identities under 'D' for 'Drug Types' in a historical ledger located in a reading room known as the Substance Blog.
Fig. 1 shows the prevalence of each expected drug category checked within October, split by sample collection location/method.

Optics on the ordinary and the obscure within October’s supply

You're looking at a tableau of reality, the drugs of Substance, of physical material: meth samples, cocaine, MDMA. These drugs exist within the context of prohibition and criminalization. They have actives and adulterants, binders and cutting agents, and in just a moment we will see how thin a line separates that which we assume to be “as expected” with that manufactured inside the unregulated market.

Echoing our usual sentiments about adulteration, there were surprisingly few samples that appeared to be from the Twilight Zone, as most were simply as expected. For a majority of samples checked, we confirm that the expected drug was indeed the only active and that no additional active compounds were present. The bar charts below highlight a few classes of drugs, differentiating samples when only the expected active was found from situations when other unexpected active components were detected.

K is K! 90% (27/30) expected ketamine samples checked were confirmed to be ketamine with no other active compounds detected, though two of these samples were found to be cut with dimethyl sulfone (MSM, an inactive cut). The remaining three expected ketamine samples were found to just be sugar with no ketamine detected. A case of mistaken identity or a nightmare turned inside out? A simple baggie mixup or a sugary apocalypse? We may never find the answers, but you can be sure to find Rod-Serling-styled commentary about sample mix-ups in the Substance Blog.

Rounding out the dissociative class, an expected dextromethorphan (DXM) sample was confirmed to be DXM while an expected PCP sample was found to be 3-HO-PCP instead.

91% (77/85) of expected cocaine samples checked were confirmed to be cocaine with no detectable active adulterants. Inactive cuts (i.e. cutting agents without a psychoactive effect) were detected in only one cocaine-positive sample: an expected cocaine base sample from Victoria was found to be cut with around 70% sodium bicarbonate (baking soda).
5 samples contained an active component in addition to cocaine:

The remaining 3 expected cocaine samples were found to contain no cocaine: two samples from Victoria were just sodium bicarbonate and the remaining sample (also from Victoria) was found to be a mixture of 4% fentanyl and caffeine. Regarding the latter sample, the service user reported that they had already tried the sample and that the effects were more similar to what they expected from down than from what they expected from cocaine.

People often ask us about the value of post-consumption drug checking and cases like this are a great example that highlight some of the benefits. The knowledge gained from a post-consumption drug check can help one to understand an experience, can aid in avoiding future negative effects, can provide guidance to repeat positive experiences, and can support conversations between buyers and suppliers about product quality. People know their drugs and this service user was spot on with their suspicions about sample misrepresentation. The data that we extract from samples through spectroscopy and spectrometry are often drops in the bucket compared to the ocean of drug knowledge that people cultivate through lived experience; we believe that the union of these ways of knowing benefit the service user and the drug checker alike.

Autumnal October day, the present. Order of events: multiple drug checks from curious community members notating online purchases of pressed Xanax tabs. Then, the drug checks you’re about to witness, with two technicians verifying the results – but with nothing more enlightening to add beyond evidence of some microcrystalline cellulose statically adhered to the inside of a baggie. You've heard of trying to find a needle in a haystack? Well, stay with us now, and you'll be part of an investigating team whose mission is not to find that proverbial needle. No, their task is even harder. They've got to identify benzodiazepines within a complex powder matrix, and in just a moment you'll ponder with them, because you've just landed in the Substance Blog.

Only one of the expected alprazolam tablets contained alprazolam, but this sample was also found to contain etizolam and flualprazolam as well. It is uncommon for us to find multiple benzos in a single sample, and this combination could result in heavily sedating effects with a very long duration of effect (on the order of 12-18 hours).

13 of the 14 other pressed pills were found to contain a benzo or benzo-related drug other than alprazolam:

Due to instrumental issues and limited sample size, the remaining pressed pill did not yield any data that was useful in determining the sample’s composition.

Both of the powder samples were collected in Victoria; both were expected to be, and were confirmed to be bromazolam with no cuts or adulterants detected.

Respectfully submitted for your perusal – the local opioid-down supply. Sample colours: every shade under the iridescent rainbow. Number of samples checked: in the neighbourhood of two hundred and forty. Origin: unknown. Composition? Therein hangs the tale, for in just a moment, we're going to ask you to shake hands, figuratively, with a spectrometer from another galaxy and another time. These are the opioid-down specific results of the Substance Blog.

This October, 68% of all opioid-down samples checked contained an additional active to the expected fentanyl. Examining Fig 3. we can see that the down supply has remained consistently inconsistent:

Bromazolam continues to be the most common benzo seen in the down supply with 25% of opioid-down samples containing bromazolam in October (60/241). Unexpected fentanyl analogues like fluorofentanyl (88 samples), and the sedative xylazine (9 samples) represent a majority of the remaining adulterants, though scattered detections of other drugs are still found and can be reviewed in the pdf report at the end of this blog.

Over the past few months, we have been seeing an increase in the number of samples that contained heroin. Of the 23 heroin-positive down samples checked in October, a majority (78%, 18/23) were found to just contain heroin and related alkaloids/synthesis byproducts like acetylmorphine (MAM) and acetylcodeine. The remaining five heroin-positive down samples were found to be high potency polysubstance mixtures:

Submitted for your disapproval: portraits of the unregulated drug market, proof positive that the opioid-down supply is as erratic and volatile as ever.
Proof also of something else: that despite four years of our best efforts to inform drug buyers and suppliers about their samples to encourage market intervention and stability, no matter how much evidence we collect to highlight how volatile the unregulated market is, no matter how many times we reiterate the recommendations from people who use drugs on solutions to the drug poisoning crisis, until safe supply is accessible for all and prohibition is ended, the drug supply will remain unpredictable and unstable.
Policy maker’s potential to enact meaningful, life saving changes continues, as always, to be stifled by their milquetoast political ambitions and their blatant disregard for human wellness (considering that 5-6 people continue to die every day in so-called British Columbia as a result of drug poisoning, a rate that appears to still be increasing even six years after the declaration of the public health emergency). Their mediocrity and inaction continues to exacerbate harms against, perpetuate stigma towards, and outright kill, people who use drugs. All for which countless condemnations and unwavering calls for accessible safe supply are rendered from the Substance Blog.

In October, we quantified fentanyl for 199 of the expected opioid-down samples containing fentanyl and found the median concentration to be 14.1%[2] with the average strength of fentanyl we normally see being around 15%. Though the median is a useful indicator, it doesn’t capture the volatility of fentanyl concentrations present in the opioid supply, as any one sample might be the lowest strength (0.1%) or the strongest (>80%[3]) Similarly, the concentration of bromazolam, our ongoing benzo-representative, was across the board in expected opioid down samples, ranging from 0.1% to 50.1% , with a median of 1.7%.

Final comment: you take this with a grain of salt or a shovelful of earth, as sugar or Substance, we leave it up to you. And for any further research check under 'R’ for Reports in the Substance Blog.

Check back next month for the November report!

In this blog post we discuss our December 2022 report and provide more information on how to interpret the results. The PDF report can be found at the end. Key findings: * The median fentanyl concentration found, across all expected drug categories, was 8.8%, with a maximum of over 80%

In this blog post we discuss our November 2022 report and provide more information on how to interpret the results. The PDF report can be found at the end. Key findings: * The median fentanyl concentration found, across all expected drug categories, was 9.7%, with a maximum of over 80% 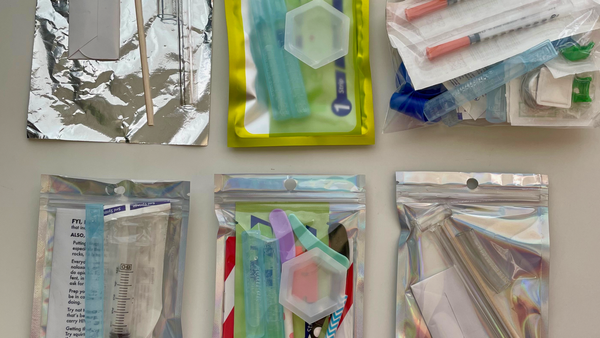